Model police cars
To get a better view of the car just click on the picture and it will enlarge.

The relationship between Puerto Rico and the United States has its origins dating back to the Spanish-American War, in which Spain, under the terms of the Treaty of Paris of 1898, ceded the island to the United States. Puerto Ricans are U.S. citizens and the United Sates Congress legislates many aspects of Puerto Rican life. However, the islanders may not vote in U.S. presidential elections. Since 1947, Puerto Ricans have been able to elect their own governor. Its official languages are Spanish and English, with Spanish being the primary language. The island's current political status, including the possibility of statehood or independance, is widely debated in Puerto Rico. 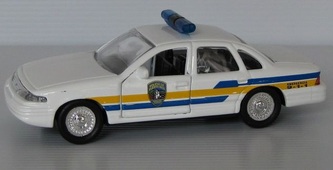